While the American Revolution was being fought across the country in 1776, out in California, on a quest to establish a Mission and Presidio in San Francisco, a Spanish expedition led by Lieutenant Colonel Juan Bautista de Anza stopped in San Mateo, camping alongside the San Mateo Creek. Chaplain for the party was Father Pedro Font and, on March 29, 1776, Father Pedro Font held the first Mass in San Mateo on the banks of that creek.  Today, a California State Historic Plaque marks this site located on Arroyo Court, opposite the San Mateo Library. 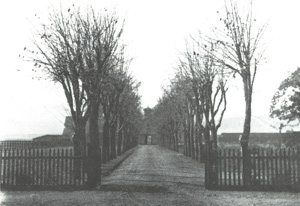 The Church soon found a more permanent worship structure at a Mission outpost known as the "Hospice"  (located where Baywood Avenue now meets El Camino Real). The hospice became a stopover for many travelers and the land was used to raise livestock and sheep. Due to the damage suffered from an earthquake, it was necessary to dismantle the building and Mass was held at a local public school. In these early days, a Jesuit priest from Mission Santa Clara rode the 40 miles to San Mateo on a mule to celebrate Mass for the locals.

In 1863, Archbishop Alemany sent Father Denis Dempsey to San Mateo with the duty of establishing St. Matthew Parish, the first parish in San Mateo County. Mass was held at the first formal St. Matthew structure, a small wood-steeple church on the south west corner of Third Avenue and “A” Street, known today as Ellsworth Avenue. The land was donated by Charles B. Polhemus, a promoter and investor in the San Francisco-San Jose Railroad. Father Dempsey served as pastor for 18 years and earned the admiration and love of his parishioners.

Over the next four decades, St. Matthew's congregation grew as the railroad brought more permanent residents to San Mateo. Around this time, the Sisters of of the Holy Family held religion classes in the church basement and in parishioners’ homes.

Learn more about our parish’s early days and history.